When Jane, a kindergarten teacher in the southern city of Guangzhou I interviewed, told a former classmate where she’d been working, the response wasn’t what she expected. “So, do you guys beat kids?” the friend asked.

Stunned and embarassed, Jane swallowed her anger and choked out a reply: “No, we don’t.”

As awkward as the exchange was, it’s not an indefensible question if you’re familiar with some of the scandals that have rocked Chinese kindergartens in recent years. In 2018, for instance, a teacher at a Beijing kindergarten run by RYB Education, a top private kindergarten chain, was sentenced to 18 months in prison after she was caught using needles to punish children. And just this September, the head of a private kindergarten in Inner Mongolia was dismissed a day after parents accused teachers at the school of jabbing children with “red needles” and “toothpicks” to enforce order.

But if child abuse cases grab all the headlines, they’re really just symptoms of a far more worrying underlying condition, one linked to the drastic changes that have swept China’s early education industry over the past decade.

China has made remarkable progress in preschool education in the past 10 years. In 2009, 51% of the country’s children aged between 3 and 6 attended kindergarten; by 2019, that number had risen to more than 83%. That’s an increase of 17.4 million students.By 2019, 61% of Chinese kindergartens were privately run, and more than 56% of students attended a private institution.– Cai Yiwen, editor

The private sector has played a major role in driving this growth, largely through the rapid expansion of private early education chains like RYB Education. By 2019, 61% of Chinese kindergartens were privately run, and more than 56% of students attended a private institution.

Not everything has gone smoothly, however. Many of the private firms that have come to dominate preschool education have little experience in the sector. The Vtron Group — a major industry player and the operator of the school in Inner Mongolia where child abuse was reported this September — primarily manufactured video walls before acquiring four kindergarten chains beginning in 2015. Their rival Shenzhen Changfang Group was better known for its LED lights before building its own education business in 2016.

The firms are angling for a piece of a market that research firm Qianzhan last year estimated to be worth 250 billion yuan ($36.1 billion). At an industry conference I attended in November 2017, a speaker favorably compared the profit margins of private education to the lucrative real estate industry. “We can’t exactly let parents know that our profit rates are even higher than real estate, right?” he joked.

Although the situation has somewhat improved, there is still a dire shortage of qualified kindergarten teachers. In 2019, Ministry of Education chief Chen Baosheng estimated this shortage at 520,000 trained professionals. In some rural areas, a single kindergarten teacher might be responsible for managing around 100 kids. 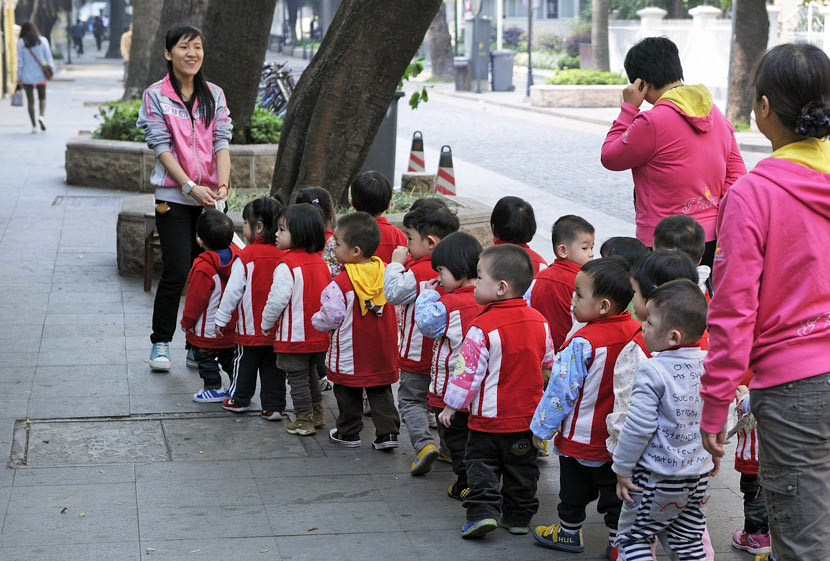 A kindergarten teacher (left) guides her students down a street in Guangzhou, Guangdong province, 2012. People Visua

Compounding the candidate shortage is the low status — and low pay — attached to kindergarten teaching jobs. When Hong Xiumin, director of the Preschool Education Research Institute at Beijing Normal University, asked a room full of kindergarten teachers at a training conference how the public viewed their work, few respondents said they were seen as educators. “Nannies,” said one. “A person who looks after kids,” replied another.

Compensation is also an issue, especially for teachers in the private sector, who do not enjoy the relative security of a spot in the civil service-equivalent bianzhi system. Even at public kindergartens, however, less than half of the teachers have bianzhi — which in any event has been characterized by stagnation, particularly in underdeveloped regions.

In short, few kindergarten teachers see their jobs as stable or sustainable careers. This has resulted in a high rate of turnover, with some schools reporting the loss of one-third of their teachers annually. Some kindergartens hire unqualified staff to fill the gap, and many do not even bother to train their teachers.According to an analysis of court cases published last year, a major cause of kindergarten abuse cases in China is a lack of training.– Cai Yiwen, editor

These issues have real-life consequences. According to an analysis of court cases published last year, a major cause of kindergarten abuse cases in China is a lack of training. In particular, since corporal punishment used to be the norm in Chinese classrooms, many educators don’t necessarily realize what they’re doing is wrong.

To try to get the industry under control, the central government issued major new regulations in both 2017 and 2018, including a stipulation that “for-profit kindergartens” can only account for 20% of early education institutions in any given region. Nonprofit kindergartens, meanwhile, were made eligible for additional public funding and preferential tax policies, but had to abide by government-set tuition rates and reinvest their profits.

Yet, in making kindergartens less profitable, the regulations risk lowering their quality by incentivizing administrators to cut costs. And considering the ongoing lack of quality teachers and an effective supervision system, it is questionable whether such moves can actually resolve problems faced by kindergarten teachers.

Indeed, many kindergartens insist on addressing issues like child abuse solely through the lens of shide, or “teacher ethics,” while ignoring systemic industry issues like insufficient training, heavy workloads, or other problems. Nor are teachers always taught commonsense knowledge that abuse isn’t just a matter of poor shide, it’s illegal.

Education is a long-term investment that requires a long-term outlook. If kindergartens — and the people who run them — continue to put short-term profits first and ignore the importance of training and cultivating qualified teachers, it’ll be the country’s students who pay the price.

A Tour of American Accents

This site uses Akismet to reduce spam. Learn how your comment data is processed.